Cowboys Taco Fest on Saturday, May 7, 2022, at the Miller LiteHouse at AT&T Stadium, Arlington. Call your friends and family to attend this first-ever unique festival that will not only feature a variety of world-class tacos but will include a solid lineup of rising country music stars, including William Michael Morgan, Hayden Coffman, The Powell Brothers, and Payton Howie. Other Hispanic entertainers will also highlight the event, which will ultimately feature numerous Dallas’ local arts, crafts and vendors. With all these exciting things to look forward to, a large crowd of spectators and festival-goers are expected to swarm this historic inaugural event. So grab your tickets now before they run out. 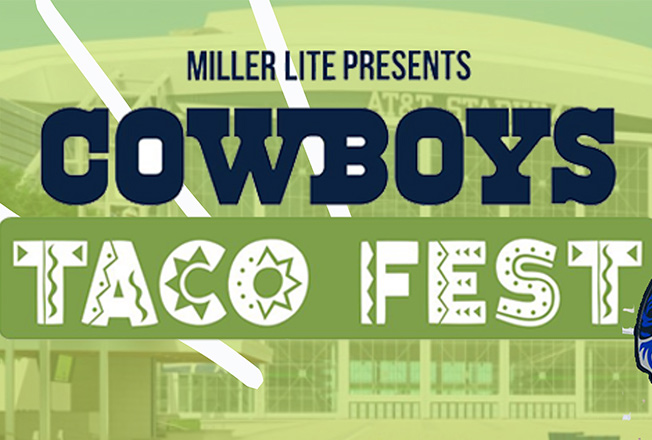 To bring the Ultimate Cinco De Mayo weekend party to Texas, the Dallas Cowboys are hosting its first-ever Cowboys Taco Festival at the Miller LiteHouse at AT&T Stadium in Arlington this May 7, 2022. If you are down for a super fun and wild weekend that is jam-packed with different activities, then this event is the one for you and the gang! Aside from the several types of tacos offered, shopping around the festival grounds will ultimately make everyone happy. Expect Beer Cowboys experiences and many fun activities that will surely blow your mind.

In addition, the country artists William Michael Morgan, Hayden Coffman, The Powell Brothers, and Payton Howie will highlight the music events. William Michael Morgan is famously known for his chart-topping single "I Met a Girl." Hayden Coffman is a singer-songwriter and a guitarist making a name in the local country music scene. The Powell Brothers are Texas-based singers composed of brothers Taylor and Blake Powell and have released a few singles and EP's that are making waves in the local country radios. On the other hand, Payton Howie is a young Nashville recording artist who is slowly making a name with her distinctly unique voice.

In addition to these performers, world-class chefs will be preparing their signature tacos for all to taste. Also, the stadium will have fan favorites, such as Ultimate Nachos, corn dogs and Chef-created burgers. AT&T Stadium will surely be a haven of tasty foods, genuine fun, and memorable music with all these events lined up. So reserve your tickets now because this event is going to be epic!