Worldwide pop sensation Ed Sheeran brings his Divide Tour to AT&T Stadium on Saturday 27th October 2018! The multi-platinum-selling, Grammy Award-winning singer will be performing chart-topping hits from his most recent album, including "Shape of You" and "Castle on the Hill", as well as other fan favorites like "The A Team" and "Photograph"! Book your tickets ASAP to avoid disappointment! 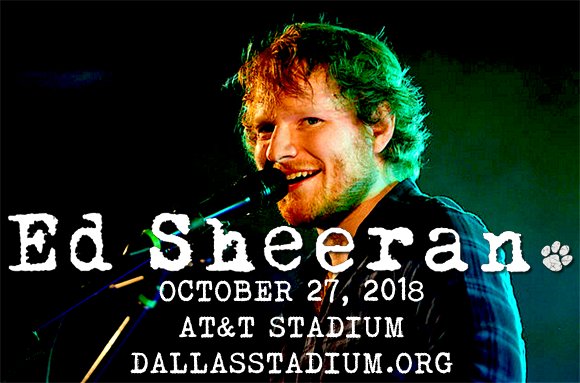 English singer, songwriter, guitarist, record producer, and actor Ed Sheeran is one of the world's best-selling artists, having sold over 38 million albums and 100 million singles worldwide. In 2011, Sheeran signed to Asylum Records, and in September that year he released his debut album, +. The album reached number one in the UK and Australian charts, it reached number five in the US, and is now certified seven-times platinum in the UK. "The A Team", the album's most popular single, earned him the Ivor Novello Award for Best Song Musically and Lyrically and was nominated for Song of the Year at the 2013 Grammy Awards, where he performed the song with Elton John. x (2014), his second album, reached number one in the UK and US, and was named the second-best-selling album worldwide of 2015, as well as winning the Brit Award for Album of the Year. It also launched the single "Thinking Out Loud", which earned him two Grammy Awards at the 2016 ceremony. His third album, ÷ (2017), debuted at number one in the UK, the US and other countries worldwide, and launched the record-breaking singles "Shape of You" and "Castle on the Hill", as well as being named the best-selling album worldwide of 2017. Sheeran's second and third albums are in the list of the best-selling albums in UK chart history: x (at number 20) and ÷ (at number 34).